Any Frozen fans out there? At the beginning of the first movie young Anna runs to Elsa’s bed and excitedly proclaims, “The Sky is awake, so I’m awake, so we have to play!” I’m thinking the castle in Arendel must have had some issues with early morning wakings.  Can you relate? I know I can!

I vividly remember my middle kiddo went through a phase of early morning wakings for the longest time that I could not figure out.  Everyday (like clockwork) he would wake up around 5:30am, chipper and ready to go. Looking back, I wonder if there was more I could do to help stop these early mornings.  I didn’t think to go look at a sleep consultant’s blog to figure out how to help 🙂

What actually is considered early?

It’s important to define what exactly constitutes an ‘early wake’ vs an overnight wake vs just waking up from the day? I know before kids I would have considered anything before 8am early- but boy how things have changed!!

Babies and toddlers (unfortunately) have body clocks that run early. It is perfectly normal and expected for your kiddo to naturally wake up ready to go for the day between 6-7am. This can be difficult for those night-owl parents and definitely requires some shift in mindset on their end to turn into an early bird.  Be sure you are prioritizing your sleep and get in bed early enough to handle an earlier (but biologically normal) start to the day.

However, if your kiddo is waking up in the 5:00 range- that is what we consider ‘early’.  There’s just something about that number 5 (even if it’s 5:58am) that just feels wrong.

Anything earlier than 5am would be considered a typical night time wake- not an early morning.

While these early mornings can become habitual (just like you may wake up naturally at the same time each day), there are definitely a few things you can do to try to stretch that sleep a bit longer:

Check the environment.  This is HUGE and the biggest cause of early mornings.

Light: The room your baby/toddler is sleeping in should be DARK.  I don’t mean kind of dark, I mean DARK- as in you can’t see your hand in front of your face.  And it needs to stay this way until the desired wakeup time. You may not think that stream of light (even just a crack!!) coming into the window at 5:30am is a big deal, but I promise it is.  That light signals your body to stop producing melatonin and start producing cortisol to get ready for the day.  Once your kiddo opens their eyes, sees that light- it’s all over.  They don’t know the difference between 5am sun and 7am sun 🙂 Be sure to invest in quality blackout curtains that cover every inch of that window.

Sounds: A change in sounds in those early mornings can trigger a wake up.  Does the white noise machine stop? Do birds start singing? Does the garbage truck come by or construction start? Can your little one hear the furnace turning on or hear water running from a parents’ early morning shower? This is typically a light stage of sleep for little ones, so it’s important to block out environmental noise.  A quality sound machine (a Hatch or Marpac Dohm are my favorites) is a must!

The temperature: Our body temperatures are the lowest during early morning so it’s possible your little one is waking up cold.  Be sure they are wearing a warm enough sleep sack or the thermostat isn’t set too low overnight. If you wake up chilled, there’s a chance your baby is too.

Are you unintentionally encouraging these early wakes?

Of course you think “NO!”, but sometimes our behavior actually makes our kiddos want to be up early.  Is the very first thing you do when your baby wakes up early is give them a warm, snuggly feed with mom? Do they get to eat their favorite breakfast snack while you struggle to keep your eyes open? Do you bring them to your bed (what a prize!!) in the hopes they will go back to sleep? Or hand over the cell phone so they can watch Bluey and you can’t get more sleep?

If that first activity is their favorite thing they get to do all day, it could be encouraging that wakeup.  Instead, wait 10 minutes before that feed, yummy breakfast or for a Bluey marathon to delay the gratification a bit.

Could it be hunger?

This is the biggest concern for babies under the 6-8 month range. Be sure your baby is getting full feeds throughout the day (not just a big feed before bed) to ensure they are getting what they need to last a full night.  While it’s important to start solids by this age, they are not the primary source of nutrition.

Do you have an independent sleeper?

If you have a baby or toddler that needs you to fall asleep at night or during night wakings, you may struggle with early mornings.  You coming in to help them go back to sleep at 5am will likely be too stimulating for them (as they aren’t as tired as they were earlier in the night) and just like explained above, is probably pretty fun.  Why go back to sleep when mom or dad is there?! An independent sleeper is more likely to return to sleep on their own. 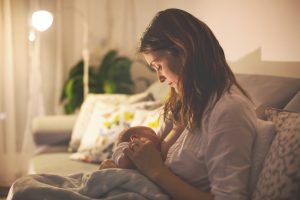 Everything checks out- now what?

Is it possible to just have an early riser no matter what you do?

Maybe! It’s never my first assumption with an early-riser, but it is possible! Is your kiddo falling asleep independently and sleeping all night? Do they wake up happy? Are their emotions/behaviors age-appropriate? Are they taking consistent naps (between 1-2 hours)? If so, you may just have an early riser! The good news is that with age, this generally does improve a bit.

Remember my early riser I talked about earlier?  5 years later, he still is generally the first to wake up in the house (though it’s not in the 5am range anymore). He is my best sleeper and the happiest guy so I know this is just who he is.

If you are in a chronic struggle with early wakes and need some help figuring out the solution, I’m here for you! This is one of the most common reasons (among many) that parents reach out to a sleep consultant.

Check out my sleep packages or book a free 15 minute call to see how I can help!!! I’d love to help you not have to wake up before the sun anymore 🙂